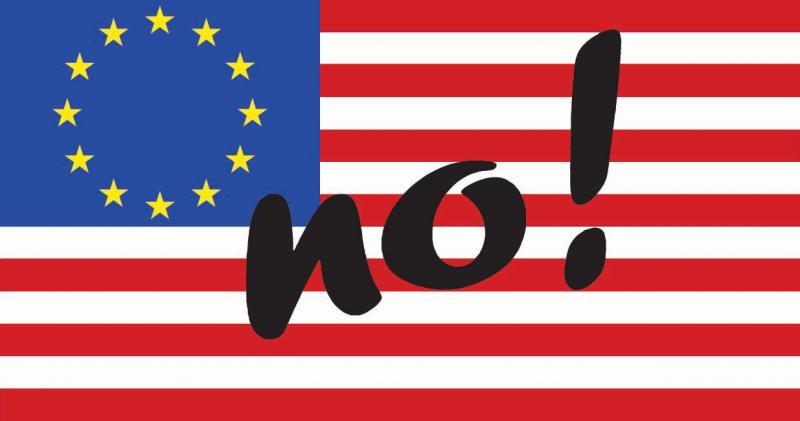 Critics score against extreme corporate rights in TTIP, but must not be fooled by the Commission’s tricks

This week, the European Commission announced a freeze in negotiations over dangerous corporate rights in the proposed EU-US trade deal (Transatlantic Trade and Investment Partnership, TTIP) and that it would conduct a public consultation on the issue. This move is an important first success for the growing anti-TTIP movement, which is unanimously opposed to proposals for so called investor-state dispute settlement in the deal. But a closer look at the Commission’s line shows that it might just be a smart trick to dispel concerns, without abandoning the corporate agenda of the trade talks.

Investor-state dispute settlement provisions would enable US companies investing in Europe to challenge EU governments directly at private international tribunals, whenever they find that changes in law in the area of public health, consumer, environmental or social protection interfere with their profits. EU companies investing abroad would have the same privilege in the US.

No wonder the growing anti-TTIP movement is united in its fight against this transatlantic corporate bill of rights – from large consumer groups, trade unions, health and environmental organisations to digital rights activists and grassroots campaigns against fracking. The Greens, Socialists and the Left Group in the European Parliament are equally opposed to excessive corporate rights. The Dutch Parliament has adopted a critical resolution. And an early day motion signed by MPs from all parties in the British Parliament “calls for investor-to-state dispute settlements to be removed from the TTIP”.

In the face of the growing opposition to excessive corporate powers in TTIP, European Trade Commissioner Karel de Gucht has announced that he will consult the public on the EU proposal for the investment protection chapter in the deal. The proposal, probably not the negotiation text but a summary that the Commission will put together specifically for the consultation, will be published in March. There will be three months to comment.

The move is an important first success for the growing mobilisation against the TTIP attack on democracy and people’s rights. Thanks to the massive public outcry, the European Commission is under enormous pressure. It has to react, and it has been forced to apply the brakes. That space must be used to ditch the proposals for dangerous corporate rights altogether.

But clearly the Commission will do its utmost to do the opposite. A close look at the Commission’s announcement shows that the consultation might just be a smart public relations move to dispel concerns without actually moving away from the corporate agenda of the trade talks.

The Commission’s press release clearly states that it “wants to use the opportunity to improve investment provisions”, not abandon them. In particular, it wants to “clarify” investor rights and “improve” the investor-state dispute settlement system, rather than abandon it.

This is not what civil society is asking for. It is opposed to investor-state dispute settlement because:

There is absolutely no need for more legal protection for companies in Europe. Existing laws across the EU already contain strong constitutional protection for private property, which are overseen by a host of court jurisdictions, including the European Court of Justice.

Just this week, trade campaigners from the Seattle to Brussels Network (S2B) have published an eye-opening, detailed analysis of the Commission’s reform agenda for the special corporate courts. While the Commission claims that in its trade agreement with Canada (CETA, Comprehensive Economic and Trade Agreement), it negotiated corporate rights with strong safeguards to protect the public interest, the S2B analysis shows that this is not the case. An earlier analysis of the leaked CETA text also concluded that the EU has failed to “introduce any major novel changes meant to address the problems that have come to light in investor-state dispute settlement.” The CETA text is likely to be a template for the EU-US pact.

3) Other trade deals are not affected by the Commission’s consultation, but they contain the same extreme corporate rights

While the Commission announced it would consult on the corporate rights in the EU-US trade deal, it did not mention the other trade deals it is currently negotiating. Media reports quoted EU officials saying that there won’t be any changes to other trade negotiations whatever the outcome of the consultation on the EU-US talks.

This means that the Commission does not want to touch the dangerous corporate rights that we have seen in leaked texts from the negotiations with Canada. But US firms will be able to file investor-state lawsuits against EU member states via these provisions, as long as they have a registered subsidiary in Canada.

Neither is the Commission willing to kick investor-state dispute settlement out of its negotiations with countries such as Japan, China, Vietnam or Malaysia. But including the far-reaching corporate rights in these agreements also poses severe risks to public budgets, public policy and democracy. There is no place for foreign investor privileges in any EU trade deal.

Interestingly, the Commission does mention the roughly 1400 investment treaties that EU member states already have in place with countries outside the EU, including the United States, but also amongst themselves. Some date back as far as the 1960s and have been rightly criticised by the Commission as “outdated” and in need of reform. These treaties can and should be terminated by EU member states, just as South Africa and many Latin American countries have already cancelled investment pacts found to have grave risks but no economic benefits. But instead, the Commission is using the flawed nature of these agreements to justify broader, EU-wide ones, which would replace the ones by EU member states.

The Commission stated that “no other part of the negotiations is affected” by the temporary freeze of the negotiations over the controversial investor rights and that “the TTIP negotiations will continue as planned.” So, it will have zero impact on all the other contested chapters that people in Europe are concerned about, ranging from food safety regulations and data protection to banking regulations. Also the controversial negotiations for a permanent EU-US mechanism for ‘regulatory cooperation’ to assess and possibly adapt new laws and regulations to corporate needs will continue at full speed. All of these issues continue to be negotiated in secret, with no negotiation texts being published.

As long as negotiation texts are withheld from the public, there is every reason to fear that TTIP will be an instrument for corporations to achieve what they could not attain in an open political process, from opening the floodgates for genetically modified foods in Europe to more financial deregulation.

5) Commission consultations are biased and dominated by corporate lobbyists

In the ‘public’ consultations which the Commission’s trade department likes to run, they call together ‘stakeholders’ to hear their views but then end up doing what they, and big business, wanted all along! Inputs are demanded as answers to questions, which are often leading and selective in terms of what is or not asked. See, for example, the biased questionnaire for one of the EU’s previous consultations on the transatlantic trade deal. How would the average citizen respond to questions such as: “If you are concerned by barriers to investment, what are the estimated additional costs for your business (in percentage of the investment) resulting from the barriers?”

As a consequence, contributions to consultations tend to be dominated by lobby groups, mainly from the corporate sector and with an office in Brussels (as was the case in the online consultation for TTIP). Answers tend to be collected in a quantitative way, which gives little opportunity for suggesting genuine policy alternatives. And when the Commission does respond to legitimate concerns put forward by civil society, it regularly simply dismisses these as ‘misunderstandings’ or ‘ignorance’.

This suggests that the Commission seeks to fulfil its consultation obligation as a largely pro-forma exercise: as cheaply as possible and in a way that allows for outcomes to be easily spun in support of predetermined policy initiatives. It might just be using the three-month consultation on the corporate rights in TTIP to try to convince the public that their corporate agenda is good.

Let's axe corporate rule once and for all

People in Europe should not miss this crucial opportunity to tell the Commission, as well as MEPs (especially in the run-up to the EU elections in May) and member states, to axe the extreme corporate rights once and for all. Get your email and twitter accounts ready for March.