[[{"type":"media","view_mode":"media_large","fid":"1082","attributes":{"alt":"","class":"media-image","height":"473","width":"730"}}]]The revolving door has been in the headlines again in recent weeks with the speedy departure of a top official from the EU's medicines agency to a prominent law firm. Such moves, known as going through the revolving door, can allow the private sector to 'capture' or unduly influence the work of the public sector and it is vital that all public authorities including the EU agencies and the European Commission take this threat seriously. This example and other recent revolving door cases again raise questions as to how well the EU institutions implement the current rules, and whether the Commission will seize the initiative to tighten up on the loopholes which undermine them.

Vincenzo Salvatore was the Head of Legal Service at the European Medicines Agency until June 2012 when he announced that he would be moving to the law firm Sidley Austin to work in their European life sciences regulatory practice. Sidley Austin said that Professor Salvatore would be providing “clients with strategic legal counseling on the EU’s legal process regulating all aspects of the pharmaceutical industry...”, a role for which his time at EMA would undoubtedly have been useful preparation.

Such a senior official as Salvatore is likely to have been aware of the revolving door rules in place at the agency and the need for “officials intending to engage in an occupational activity … [to] inform their institution thereof”. After all, Salvatore was Head of Legal Service when the former director of that agency, Thomas Lönngren, himself went through the revolving door. In that case, EMA only belatedly applied restrictions on Dr Lönngren's new consultancy work. 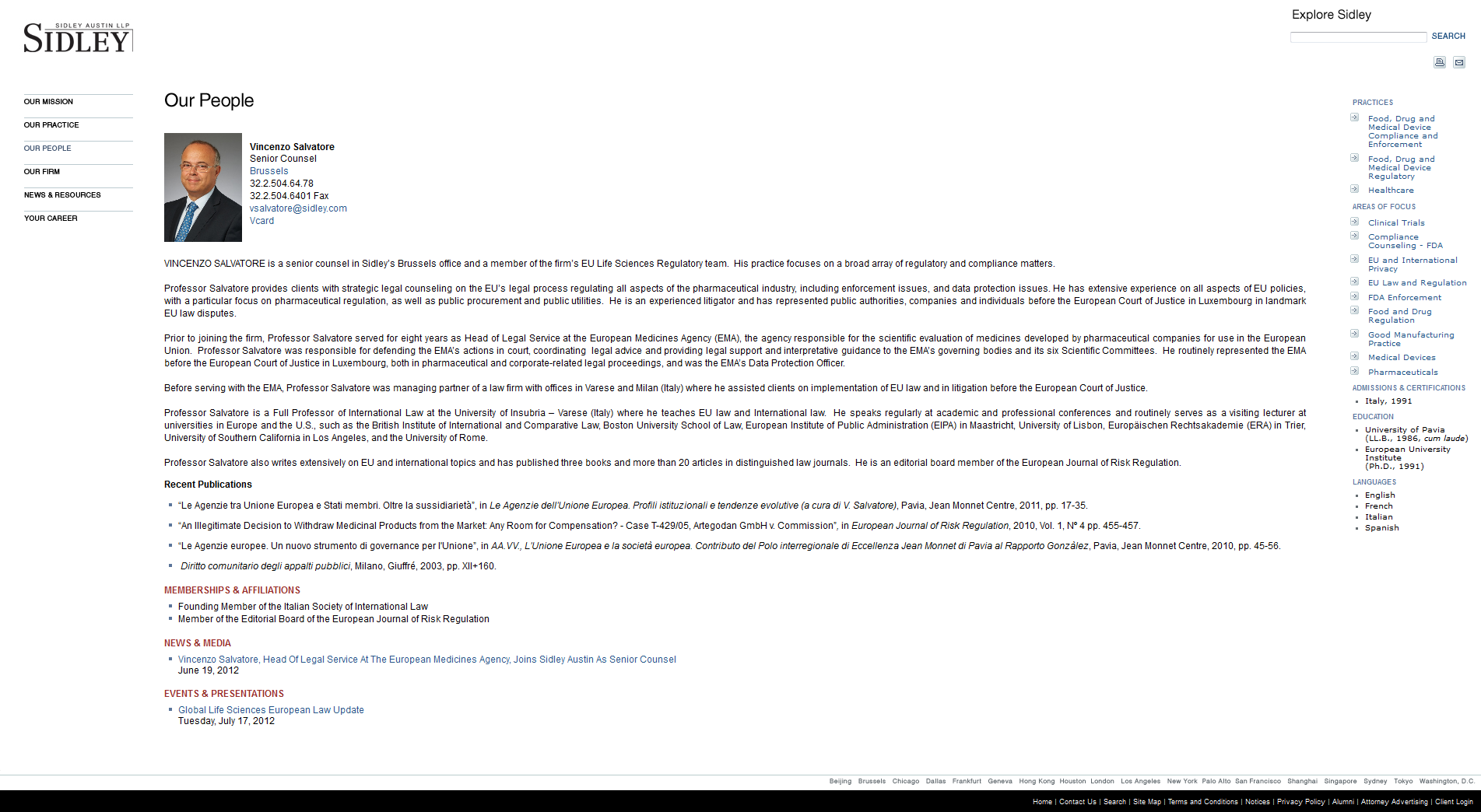 Professor Salvatore was quoted in the Financial Times on 5 July 2012 as saying: “There is nothing to stop people working in their field of expertise”. Sidley Austin has told Corporate Europe Observatory: "Sidley and Professor Salvatore have followed every procedure required regarding his departure from the EMA. Since we are awaiting the results as the EMA works through its process, it is not appropriate to comment further at this time."

Yet EMA appears to have been caught on the hop by this move. Guido Rasi, the new Executive Director of the European Medicines Agency, told the Financial Times: "I have not approved any post-EMA activities for Vincenzo Salvatore. Before he left the Agency ... he indicated he was intending to work as an independent lawyer and as consultant for some law firms, but without providing any specific details." Rasi went on to say that he has set up a review which will probe possible conflicts of interest arising from this case.

[At the original time of writing, the review had yet to report. Now (6 August 2012) this review has reported back and EMA has imposed several conditions upon Salvatore. You can read all the latest details on this case here.]

An interesting element of the Salvatore case is that he was a contract agent (rather than a permanent official) at EMA and it is clear that there are loopholes in the revolving door rules for contract agents.

Contract agents are only covered by the EU's revolving door rules if they are considered to have had access to “sensitive information” during their time at the EU institution. Of course, as Head of EMA's Legal Service it is hard to see how Professor Salvatore would not have had access to sensitive information during his time at EMA, and so would not be exempt, but this loophole is regularly applied to other EU officials.

Take the case of Darren Ennis. When he left the European External Action Service (EEAS) in summer 2011 for a new job as director at MHP Communications in Brussels, he had, according to the EEAS: “not had access to sensitive information during his time with the European External Action Service and was consequently not deemed subject to the obligation of requesting authorisation to take up an offer from another employer in accordance with Article 16 of the Staff Regulations".

Ennis had only been working for the newly-formed EEAS for a month when he resigned, and so arguably, may not have come into contact with “sensitive information” during this time. However, this is not the whole story. 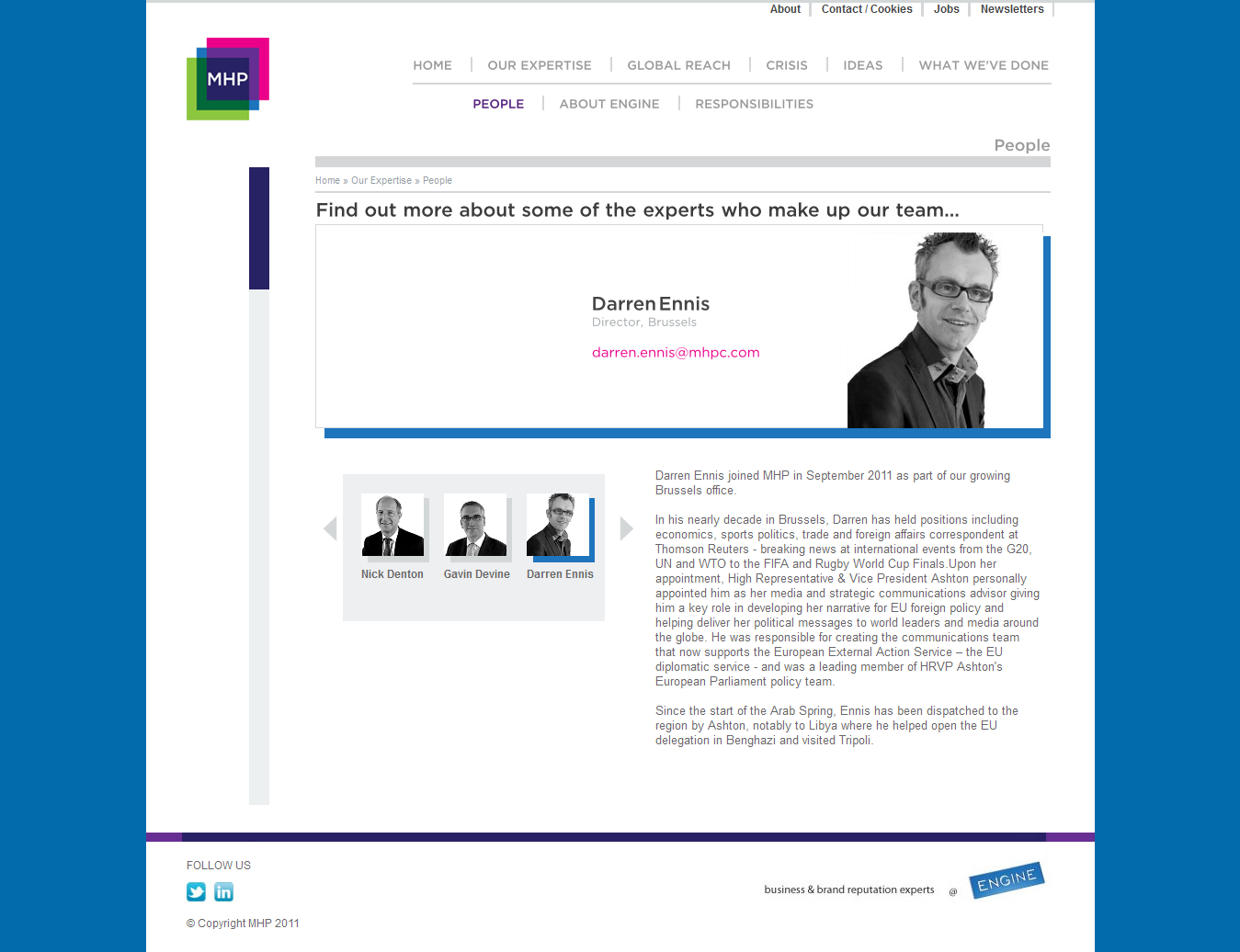 According to his biography on the MHP website, Ennis was appointed as Catherine Ashton's media and strategic communications advisor not long after her own appointment in December 2009 as EU High Representative of Foreign Affairs and Security. In this role, the website says he had “a key role in developing her narrative for EU foreign policy and helping deliver her political messages to world leaders and media around the globe”. It seems hard to imagine that “sensitive information” was not involved in this work. Yet, Ennis's move to MHP was unregulated and unscrutinised for possible conflicts of interest.

This goes too for the move by Harald Boerekamp from DG ECHO (which handles humanitarian aid and civil protection matters) to Interel European Affairs, one of Brussels largest lobby firms, in May 2012. According to DG ECHO, Boerekamp did not need authorisation to join Interel as he had not had access to sensitive information, even though he had worked at that DG for nearly two years; and had previously been with the Commission’s secretariat general for another year.

Overall, CEO considers that the definition of “sensitive information” needs clarifying and that the revolving door rules should be applied to all contract agents with a policy-making role or any significant working history at an EU institution. CEO also wants to see a cooling-off period of two years for all EU staff entering lobby or lobby advisory jobs, to avoid the risk of conflicts of interest.

Marcus Lippold worked for ExxonMobil from 1992 until he joined the Commission to work in a series of oil and energy-related jobs. Originally he was a senior energy economist at DG-TREN (transport and energy), working on oil and coal-related legislation, including European oil upstream and downstream sectors and related refinery products and product markets. In 2009, he led a study assessing the competitive aspects of the oil product markets in the EU 27. His current role is as international relations officer working at DG Energy.

CEO believes that the current rules are weak in this area and instead of relying on officials to step forward to raise potential conflicts of interest, the institutions themselves should be proactive in scrutinising all incoming staff, including whenever they move to a new job internally.

These cases appear to indicate flaws with the EU's current revolving door rules – and it is time for a revamp. All EU bodies should make sure that they have robust rules in place which ensure that all incoming and outgoing staff are scrutinised for potential conflicts of interest and that any necessary restrictions, recusals or cooling-off periods are applied to protect the public interest.

As CEO has said elsewhere on this blog, it is time that the revolving door was taken more seriously and that the rules became fit for purpose.