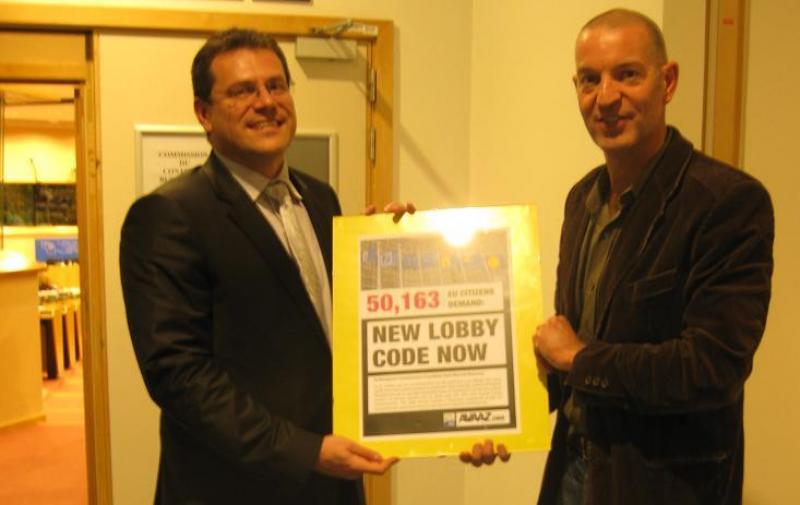 Yesterday, ALTER-EU and Avaaz handed over a petition to Commissioner Šefčovič signed by over 50,000 people urging the Commission to close the revolving doors for ex-Commissioners who move on to lobby jobs.

The petition was delivered in the European Parliament just before the Commissioner addressed MEPs on the Budgetary Control Committee on the issue of a new Code of Conduct for Commissioners. Last month MEPs voted to freeze part of the next year’s allowances for ex Commissioners unless the new code includes strong rules to prevent conflicts of interests.

Clearly under pressure as a result of the public outcry and the MEPs demands, Mr. Šefčovič said the Commission was pushing ahead with a revised Code of Conduct.

But the points he presented failed to meet the level of ambition demanded. He was not able to give any details of the planned changes. He did however promise that the Commission is carefully studying ALTER-EU’s recommendations.

Mr. Sefčovič said the Commission considers extending the period during which ex-Commissioners must ask permission from the Commission before starting new jobs or other activities. ALTER-EU has suggested a three-year cooling-off period to match the time over which ex-Commissioners receive allowances that are supposed to guarantee their independence. The Parliament also demands a reinforced ‘cooling-off period’. In response to questions from MEPs, the Commissioner declined to be more specific and did not commit to extending the notification period.

ALTER-EU has stressed the need for a broader interpretation and a specific definition of conflicts of interests in order to exclude lobbying and lobby advisory jobs. Lobby jobs should be off-limit regardless of the policy area to avoid undue influence when ex-Commissioners use inside knowledge and contacts to advance the interests of new employers. The Parliament has called for “strengthened requirements regarding work in the private sector after leaving the Commission”. Commissioner Šefčovič told MEPs that the new rules will substantially limit ex-Commissioners’ contact with their former colleagues and will explicitly ban lobbying. It seems the Commission is not inclined to include lobbying advice in this ban. This would be a lost opportunity to effectively curb conflicts of interest and undue influence. A positive step is the inclusion of shares ownership and other non salary revenues in the scope of what can be considered as a conflict of interest.

Martin Ehrenhauser MEP highlighted the need for early and public notifications of the posts ex-Commissioners are intending to take up. Mr. Sefčovič didn’t indicate any willingness by the Commission to move in that direction, but only promised more transparency on the proceedings after the assessment has been done. The Commissioner said that the Ethical Committee will have to publish the reasoning behind its conclusion and the evidence on which this is based. This would be a step forward.

But the Commissioner didn’t demonstrate a strong will to deal with the problem of the biased composition of the ethical committee which is currently chaired by a former Commission official who has himself gone through the revolving door. The Commissioner only mentioned “the intention to broaden the mandate of the Committee and its composition”. However, it is not the size but the nature of the membership of the ethical committee that has to change. ALTER-EU has stressed the need to include independent experts on public administration ethics, such as academics and national government ethics regulators. The Parliament has asked for the establishment by the EU institutions of a joint advisory body on standards in public life.

The Parliament has also asked for the introduction of clear sanctions for ex-Commissioners that violate the Code of Conduct. Mr. Šefčovič did not mention this crucial point in his speech. The Commission has only said that “if wrong-doing is found, the Commission can always request that the Court of Justice reduces or suspends payments, such as the pension.”

Mr. Šefčovič did not embrace demands by Ingeborg Gräßle MEP and Jens Geier MEP to change the rules regarding ex-Commissioners’ allowances so that they can be removed when ex-Commissioners find other jobs. He said they will try to move in this direction but the rules on allowances are provided by a resolution of the Council dating back to 1967 which is hard to change. Consequently, the Commission is not willing to suspend the allowances of ex-Commissioners who violate the Code of Conduct.

The Commission will first draft a new Code of Conduct and if the College of the Commissioners adopts it, then it will come up with a new mandate for the Ethical Committee.

MEPs Ingeborg Gräßle and Bart Staes said that the Parliament needs to see written proposals in order to check if its conditions are met and unfreeze allowances for 2011. Søren Søndergaard MEP has also previously highlighted the importance of this issue for the Parliament. The Commission should indeed consult with the Parliament before finalising its revision of the Code of Conduct.

The College of Commissioners will discuss the issue on November 18 and finalise the revision of the Code of Conduct at the beginning of December. While Mr. Šefčovič’ speech shows that the Commission now recognises the need to strengthen the Code on a broad range of issues, the lack of detail could reflect limited ambitions for change.

The revision of the Code of Conduct for Commissioners is a historic opportunity to finally shut the revolving doors for ex-Commissioners and thus close off an important channel for undue corporate influence on the European Commission.