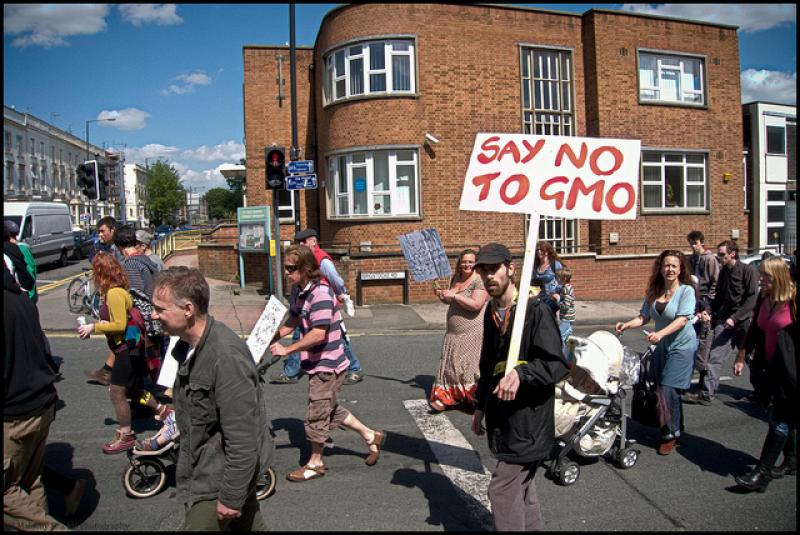 A proposal to allow member states to ban specific GM crops from their territories looks set to have a giant biotech-industry-friendly loophole.

On Wednesday 28 May, EU countries will have what could be a decisive meeting on the text of the proposal. And paradoxically, this text is turning out to be rather Monsanto-friendly. A final decision could be taken at the Environment Council in June. So how did we get from a national ban proposal to an industry-friendly opt-out?

The awkward EU vote on Pioneer's GM maize last February created the feeling of urgency that something needed to change in the way GM crops are approved. While nineteen countries voted against, and only five in favour, the Commission still intends to give Pioneer GM maize the go-ahead. That does not look good.

The proposal to hand back some decision powers to member states regarding GMO approvals has been discussed on and off for some time now.1 Of course initially the biotech firms were very opposed to the idea of national bans. But the current text clearly has the biotech lobby's fingerprints all over it. Now they see it as an opportunity to break the legal and political stalemate and finally get their GM crops growing in Europe's fields, despite their unpopularity.

As it stands, the current text proposed by the EU Presidency (currently Greece) - see attached below - states that for a member state to ban a GMO, they would first have to ask the GM company itself not to market it in their territory. If the company does not agree, the member state's second option is to give certain policy arguments, from a limited set of possibilities2. This is the second major weakness in this proposal: these types of arguments bring great legal uncertainty and may simply not hold up when challenged in court.

Documents obtained by way of Freedom of Information acts by UK group GeneWatch show how Brussels biotech lobby group EuropaBio has been advocating precisely this approach for two years. One three-page document entitled, 'A new strategy on GM issues' probably dates to 2012. The paper concludes that a new approach is needed to break the standstill on GM crops in Europe. This includes an "amended nationalisation proposal" putting as a condition that member states can only apply for a national ban if they have first asked the company to refrain from marketing the GM crop in their country, and if the company has refused.

Another condition posed by EuropaBio is that a contamination threshold is agreed by member states to allow the presence of unauthorised GMOs in seeds (this is already the case for animal feed, but not yet for food and seeds). And last but not least, that EU member states should no longer vote against a GM crop application at a European level if they can use one of these two options for a national ban. What follows is a detailed list of items needed to get support from the German, UK and French governments, and the European Commission. It is noted in the EuropaBio document that "These changes appear acceptable to many member states. Even if some MS object, the votes gained with UK and German support compensate for any lost votes."

The set of documents released to GeneWatch also indicate a close relationship between lobby groups EuropaBio and the Agricultural Biotechnology Council (ABC), and the GM team in the UK Ministry of Environment DEFRA. An email sent by EuropaBio giving “input” to the UK team sent on 17 April 2013 following an earlier meeting advised the team to “give the message a strong environmental (but of course also innovation and competitiveness) spin”. EuropaBio advised caution in messaging on 'nationalisation', “even if it may appear tempting at first sight to link the GM issue with a 'devolution from Brussels' agenda”. The GM team wrote back the same day: “We prefer the word 'focus' to 'spin'” and explained the particularities of a national ban in the case of the UK.

The Agricultural Biotechnology Council is a UK based lobby group whose membership only comprises the six largest agrochemical multinationals: BASF, Bayer, Dow AgroSciences, Monsanto, Pioneer (DuPont) and Syngenta. ABC itself is a member of EuropaBio. Genewatch has published a detailed assessment of the many emails released following their FoI request on the UK industry lobby. They show the extent of receptiveness of people inside the government to industry influence on issues like science and research funding, GM regulation, and the Transatlantic Trade and Investment Partnership (TTIP).

Owen Paterson - praised in one EuropaBio letter for his "vocal leadership" on GM issues - was appointed Secretary of State for the Environment in the same year, in September 2012. It is under his leadership that the UK Government changed its position on the national opt out from being opposed to being in favour. Dr Helen Wallace of Genewatch concludes that the UK Government has been working closely with the GM industry "to get a Monsanto-friendly version of the opt-out”. The aim of both actors is to break the deadlock in decisions on GM approvals for cultivation. “If member states back down from highlighting the environmental harms of RoundUp Ready GM crops, these could be fast-tracked into the ground in some parts of Europe, despite the likely harm to wildlife. We need to be improving the GM risk assessments not facilitating contamination of food, feed and seed in the European market with GM crops that nobody wants”, she adds.

A decision on the national GM bans is expected to be taken at the June Council meeting. If they go ahead, RoundupReady GM crops, which are in the pipeline for approval, could be planted in different parts of Europe as of next year. This would be very bad news for agriculture in Europe. At the very least those nineteen countries that voted against Pioneer's GM maize should seriously rethink any support for this proposal.

how low can politicians go under influence of lobbyists = corruption!