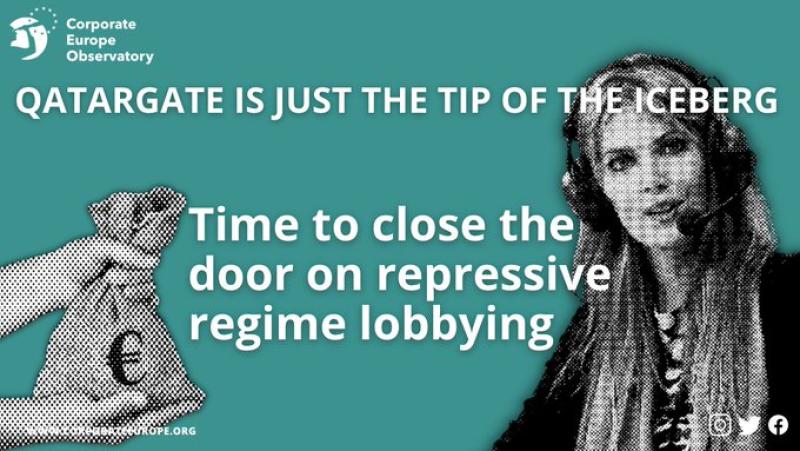 The Qatargate scandal has rocked the European Parliament and raised questions about conflicts of interest, second jobs, revolving doors, lobby transparency, informal 'friendship groups', gifts and trips, and out and out bribery, but its ramifications go even further. Alongside the UEFA World Cup, tech lobbying, and the role of fossil fuel lobbyists, at the heart of this scandal has been the following: how far does the interference of overseas and repressive governments go into EU affairs, and what should be done about it?

Corporate Europe Observatory has been raising the alarm about repressive regime lobbying in Brussels for years, and we have consistently pointed out problems in the current EU rules and institutional culture which have failed to tackle these problems.

Below you can find all our analysis and commentary on Qatargate and related developments (this page will be kept updated).

Olivier Hoedeman, Research and and campaigns coordinator of Corporate Europe Observatory says, in response to Qatargate,:

"This horrific unfolding bribery scandal is a product of years of negligence which have come back to haunt EU institutions. We have called for an effective defence against repressive regime lobbying for many years, but our demands have either been ignored or been poorly implemented.

“Can you imagine if we had all had access to an overview of who lobbyists are and who they meet with in the European Parliament? And better still if we had rules that would prevent repressive regime lobbyists from walking the corridors of the institutions unhindered? These proposals have been around for a while, but they have not been listened to.

“This scandal may just be the tip of the iceberg - we don’t know its full extent yet. But we do know that enough is enough. Earlier this year a ban was imposed on dodgy Russian lobbyists way too late. Today, Qatar is in focus. These are both wake-up calls. It’s not good enough to take reactive measures after yet another scandal; we need a credible over-all design to prevent repressive regime interference in the EU’s democratic decision-making.”

How to close the door on repressive regime lobbying - 15 December 2022.

Check out media coverage via this Twitter thread here, 20 December 2022.

EU Observer comment piece: 'Qatargate' is the tip of the iceberg, 16 December 2022.

In 2015, Corporate Europe Observatory first raised the alarm about repressive regime lobbying in Brussels. Our comprehensive report highlighted the role of lobby consultancies, PR agencies, and law firms in organising influencing strategies on behalf of some of the world's worst human rights abusers. This report included case studies on the leaders of Nigeria, Russia, Kazakhstan, and Azerbaijan, alongside Qatar (page 53).

Since then we have published several other extensive reports highlighting these ongoing problems:

Most recently we have raised these issues in the context of Russia's illegal invasion of Ukraine, including on this Twitter thread. 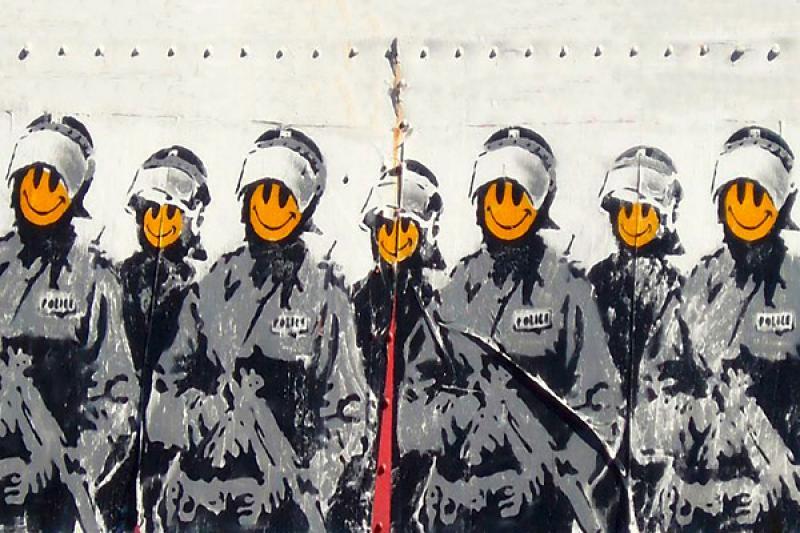 Corporate Europe Observatory is concerned that the current energy crisis, provoked by Russia's illegal invasion of Ukraine, may have aggravated the problem of members states and EU institutions actively courting Qatari lobbying, including to secure higher imports of gas and oil. This is just another stark reminder that the EU’s reliance on gas is not just a disaster for the climate and for energy bills, but can lead the EU to support repressive regimes directly or indirectly. Find out more about our demands for fossil-free politics here.

Sourcing liquified natural gas (LNG) from Qatar is mentioned twice in the European Commission's REPowerEU plan on getting off Russian gas, while German energy firm RWE has just signed a deal to secure 2 million tonnes of LNG from Qatar annually, starting in 2026, facilitated by the German Government.

This is not the first corruption scandal involving a repressive regime that the EU hopes to source more gas from. Between 2012-2014 the Azerbaijan regime channelled billions of dollars through offshore companies to launder money and pay for bribes, including towards many figures involved in the Italy-Azerbaijan mega-pipeline, the 'Southern Gas Corridor', which they eventually had approved. MEPs were again involved in whitewashing a repressive regime’s image in the face of election rigging and human rights abuses as part of Azerbaijan’s ‘caviar diplomacy’.

Meanwhile, a series of articles have exposed the links between the MEP at the heart of the scandal (Eva Kaili), her wider family, and tech industry influence at the EU level. Questions have been raised about undue influence on the development of the European Parliament's approaches to blockchain tech and AI. Meanwhile the online archive of LobbyFacts (the lobby data website run by Corporate Europe Observatory and German lobby watchdog LobbyControl) has provided invaluable historical data about 'disappeared' entries from the EU lobby register. (Twitter thread here, 13 January 2023) LobbyFacts has also revealed registered lobbyists from Qatar.

What follows is a list of our priorities for urgent reform in the wake of the unfolding scandal involving lobbying by Qatari, Moroccan, and other non-EU government interests.

- an EU-wide Foreign Agents’ Registration Act (FARA) - we demand new legislation, as already exists in Australia and the US, to set up a legally-binding register with full disclosure for any overseas government agent or their representatives lobbying European institutions. The register must require full lobby/ influencing contracts to be published alongside supplementary information such as agendas for political events, press coverage etc.

- ban interference of repressive regimes in European Parliament - we need to ensure a ban on official and unofficial friendship groups actually gets enforced. Repressive regimes should not be able to directly or indirectly fund these groups’ work; nor should they fund the work of MEPs, or of EU or national political parties, including their offices or overseas trips and hospitality.

- much tighter financial rules in the European Parliament - there should be action to tackle MEPs' second jobs which provoke conflicts of interest and on unaccountable daily allowances, as well as tougher action on honorary fees, gifts, shares, and consultancies.

- block the revolving door - too many former politicians and officials have taken lucrative jobs with corporations or other organisations closely associated with repressive regimes. We need lengthy and well-enforced cooling-off periods and lobby bans for former MEPs.

- a legally-binding EU lobby register - the current EU lobby register is too weak and needs to be made legally-binding. This will enable tougher sanctions with fines and open prosecutions for wrong-doing. To protect democracy from harmful interference, strong pro-active investigatory and sanctions powers are needed that are comparable to those of the European prosecutors office for fighting financial fraud. Furthermore, think tanks and NGOs should once again have to declare an annual EU lobby spend and think tanks should be explicitly required to publish a list of all their funders (including income from non-EU governments) and the sums involved. Lobby consultancies, law firms, or other private firms that represent regimes in breach of human rights, or that engage in online, data-driven disinformation campaigns on behalf of third country governments with the aim of influencing EU officials and citizens, should be removed from the register and barred from meetings with public officials. This can be implemented by expanding the definition of ethical behaviour in the code of conduct attached to the EU’s lobbying register.

The Alliance for Lobby Transparency and Ethics Regulation (ALTER-EU) has written to all MEPs, together with other transparency organisations, to demand an urgent response to this scandal. 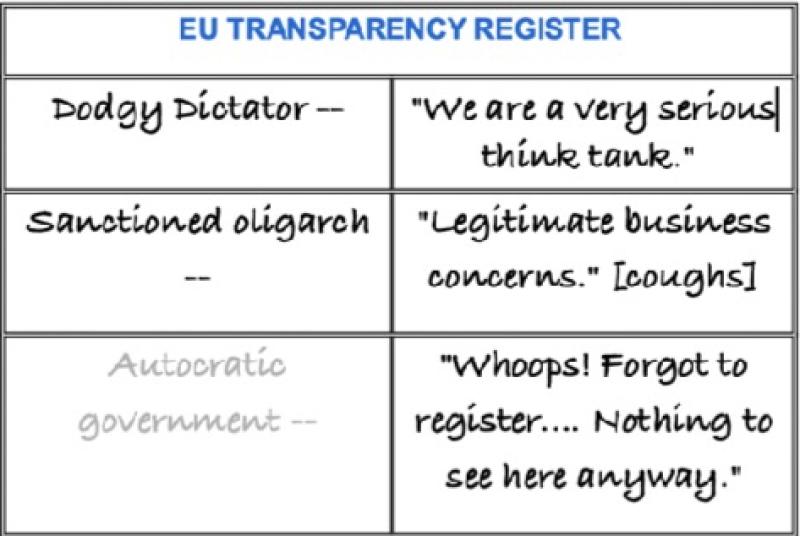