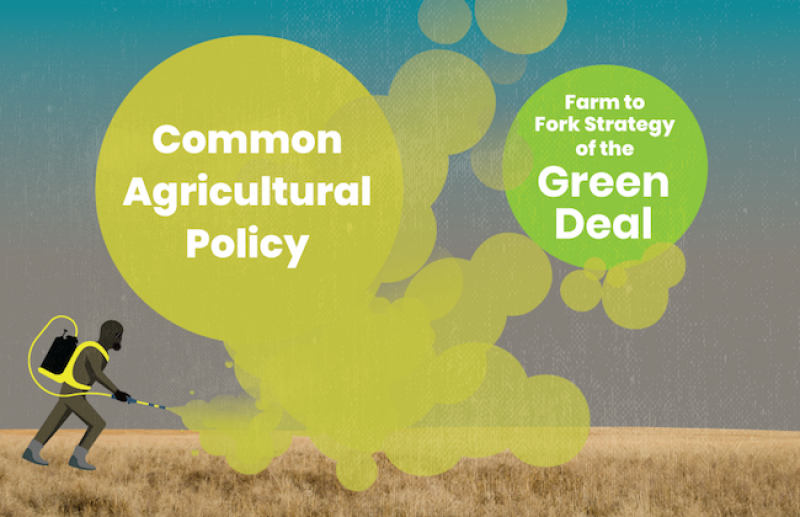 When it comes to European politics one could say the spirit of George Orwell is in Brussels these days.

An NGO – or front-group - called Fight Impunity is at the heart of the biggest corruption scandal in the history of the European Parliament. And next Monday the 19th the European Council is about to softly kill the main legislative part of the Farm to Fork and Biodiversity strategy in the name of food security. EU ministers and their experts are, at the COP15 in Montreal negotiating an international treaty for bold action to stop the dramatic decrease of biodiversity to be announced on Monday the 19th.  But on the very same day their colleagues in Brussels will agree to taking a step which will delay and derail the most meaningful legislative proposal from the European Commission to protect… biodiversity.

This article first appeared on EUObserver

The Council’s ludicrous argument is: “we cannot afford any policies designed to make food production more sustainable because of the war in Ukraine”. Over 700 hundred scientists and over 200 NGOs are calling them out today. We’re not naïve and fear they will remain deaf and blind: or how European ministers are about to write their version of fake news and add to EU-schizophrenia.

So unfortunately next Monday could be the dreadful day that the agrochemical lobby Croplife and the agrobusiness lobby of Copa-Cogeca, with a helping hand of their political allies of the EPP and the Czech presidency, will get it their way and halt the legal green ambitions of the Farm to Fork Strategy, an essential pillar of the Green Deal presented three years ago by Ursula von der Leyen, as Europe’s “man on the moon moment”.

In June Commissioner Frans Timmermans presented the European legislative proposal (Sustainable Use Regulation, SUR) to achieve a 50% pesticide reduction by 2030. This to avoid that the Europe’s countryside in the near future turns into a moonlike landscape: the European Commission labels 60-70% of soils as "unhealthy".  And scientists repeat today that the “heavy use of chemical pesticides in agriculture is strongly linked to declines in insects, birds, biodiversity in terrestrial and aquatic systems and detrimental impacts on global public health”.

They add in today’s statement that “for that reason, the global reduction of pesticides use is one of the key negotiation points during the UN Biodiversity Summit (COP15) in Montréal”.

In stark contrast to these facts, the  toxic lobby for derailing the Farm to Fork ambitions – for example using  partial and instrumentalised scientific studies about agricultural productivity – managed to get their ask for an extra impact assessment on the political agenda right after the start of the Ukraine War. The Agri-council has asked for an additional impact assessment to the thorough assessment performed by the Commission before the outbreak of the Ukraine war.

According to the scientists “the gain in knowledge of the required additions to the thorough Impact Assessment performed by the European Commission (on the SUR) is highly questionable, as the long-term challenges facing the EU food system and state of biodiversity have not changed since the outbreak of the war in Ukraine”.

Or in the words of Timmermans: "Using the war in Ukraine to water down proposals and scare Europeans into believing sustainability means less food, is frankly quite irresponsible. Because the climate and biodiversity crises are staring us in the face. And every European citizen is seeing this on a daily basis now, wherever you live. Let's also be quite straightforward: Science is very clear: this is what threatens food security. This is what threatens our long-term food security."

Lead signatory and Co-Chair of the World Biodiversity Council, Josef Settele said last week: "Current political efforts to abandon the sustainability goals of the European Green Deal, including the reduction of pesticide use and the restoration of biodiversity, do not protect us from the current food crisis, but lead to a worsening and make the crisis permanent”.

Indeed, in spring the group of scientists published the Potsdam statement  -  in which they stressed “the need to take demand-side actions in order to future-proof the EU’s food system, as such mitigating pressures on global biodiversity and sustaining the foundation for long-term food security”.

And extra impact assessment does not sound so dramatic one could think. But it would cause so much delay that the SUR proposal will not be negotiated, voted nor implemented at all before the 2024 EU elections. And thus be off the table.

That would also be a slap in the face of the 1,1 million EU Citizens that signed the recent official European citizen initiative 'Save Bees and Farmers initiative'

In an internal document describing a meeting with DG Agri on 1O of October, mr Pekka Pesonen , head of Copa-Cogeca complains about the fact that the last Von der Leyen State of the union speech “did not include any direct reference to farming and/or food security.” On the SUR Copa-Cogeca considers “the proposal on targets as untenable and should be rejected.”

Pesonen points out that the sector is going through “a very sensitive period” market by uncertainty on many fronts, such as energy prices and also of other inputs like fertilisers and …the Ukraine war. All this mr Personen argues concerns on the economic sustainability of some businesses. Especially imposing new measures under the SUR is a big worry to farmers, claims Pesonen because it will “push many of them out of business”.

Pesonen should know that despite hundreds and hundreds of billions of tax payer’s money for the CAP, one third of EU farmers have gone bankrupt and their average income is 30% lower than the average EU income. Prices of pesticides and fertilizers have gone up dramatically over the past 20 years. Agrobusiness makes huge profits, farmers and biodiversity literally die out.

The scientists write that “it is worrying to observe that a number of Member State governments and Members of the European Parliament have called for the delay and/or watering down of the new pesticides regulation. Citing questionable ‘food security’ and ‘resilience’ concerns”.

Unless at least one of them wakes up, the EU’s Energy Council will next Monday approve a so called A point on their Agenda asking for the extra impact assessment. It seems like a technical thing, but is highly political and in some way could be a decisive moment for the EU’s Green Deal. According to the rules of procedure of the Council it would take one courageous minister to formally ask to have the item removed from the agenda.

While at the COP15 in Montreal the world community tries to secure a deal on protecting nature and ecosystems and getting a ‘Paris Deal’ for preserving what is left of biodiversity, in Brussels they do the opposite. On exactly the same day.

Orwellian at best, toxic and cynical for sure.