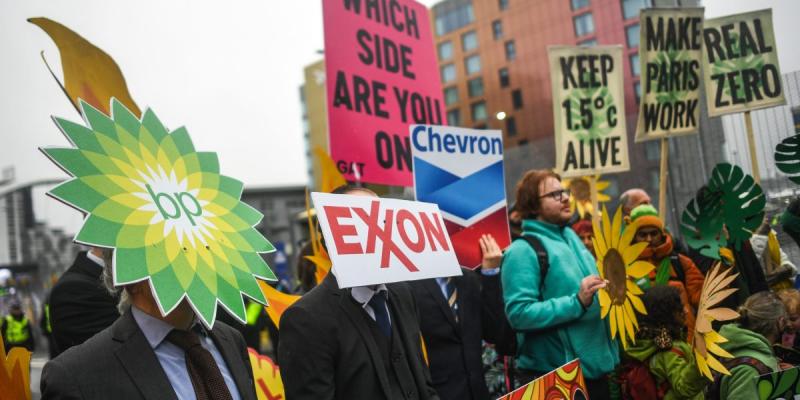 As predicted, the outcome of COP26 spells disaster for people and the planet, in particular for those countries in the global South on the frontlines of climate change. Rejected by the climate justice movement, the final text mirrors the agenda of rich developed countries and their oil and gas industries. It was so bad that on Friday, officially the last day of COP26, all parts of civil society were led by indigenous youth in walking out of the negotiating halls in protest - things eventually wrapped up on Saturday night.

While the vaccine apartheid and UK incompetence ensured many delegates from the global South were not present (neither government negotiators nor civil society), one delegation was there in force: the fossil fuel industry. It had more than 500 lobbyists registered to attend the talks. If it were a country, it would have been the biggest delegation at COP26, more than twice the size of the UK delegation and outnumbering indigenous delegates by over two to one. The Canadian government was particularly welcoming, even using its own delegation to bring in two lobbyists from Alberta tar sands corporation Suncor.

I don't know about you, but I sure am not comfortable with having some of the world's biggest villains influencing & dictating the fate of the world.https://t.co/vjQRBrcoC7

In the build up to COP26, CEO of oil & gas major Shell said “We were told that we were not welcome, so we will not be there.” Yet it still had seven registered lobbyists, including head of climate, David Hone. Norwegian state-owned oil and gas giant Equinor also had at least seven delegates registered, including Amber Rudd, chair of Equinor UK’s International Advisory Group. Until Sept 2019, Rudd was a UK cabinet minister under Prime Minister Boris Johnson, and had previously served as Secretary of State for Energy and Climate. But in 2020 she took a spin through the revolving door to join Equinor. The major gas producer claims members of its International Advisory Group do not represent it, but Rudd has been publicly speaking on behalf of the company in the build up to COP26 and is registered at the talks under Equinor’s name (as part of the Global Wind Energy Council delegation). Rudd can use her connections to ex-colleagues to ensure Equinor’s interests are heard, such as promoting the failed technology Carbon Capture and Storage (CCS) and hydrogen, or helping secure public funding for its new CCS and fossil hydrogen plants in the North East of England and Scotland.

Inside the negotiations, the oil and gas industry in particular found themselves constantly confronted by protest when taking part in side events - both in person and virtually. The same happened at events outside of the negotiations every time the industry tried to push its false solutions. It was amazing this year just how many people, both inside and outside the talks, explicitly mentioned the presence of fossil fuel lobbyists and called for them to be kicked out. It feels like the tide is really changing - no wonder the industry is scared of showing its face.

Despite trying to keep a lower profile compared to previous years, the fingerprints of the oil and gas industry were all over the final negotiating text. Fossil fuels were explicitly mentioned for the first time, which should be seen as a step forward, but it’s worth noting what was omitted: the text references “phasing down” coal, but the US, EU and Norway obstinately ensured oil and gas were excluded, despite India trying to include them. This is because the likes of Exxon, BP, Shell and Equinor decided years ago that coal should be sacrificed as being too dirty in order to present their own gas-based business models as the ‘clean’ option, the climate-friendliest fossil fuel. This also explains why fossil gas is at the heart of European and US net zero plans - from governments and corporations alike.

But let’s not be under the illusion that Big Oil and Gas waited to see the negotiating text before weighing in. They’d been heavily lobbying in national capitals long before COP26 started. One of the key channels of influence is through the revolving door, and research by the Fossil Free Politics campaign showed since COP21 there have been more than 70 revolving cases involving six of Europe’s biggest oil and gas majors and their lobby groups, either hiring staff from government or seeing their own staff placed in government.

A key part of the Big Oil and Gas agenda was promoting the big con that is “net zero by 2050”, which was placed front and centre by the UK government and the UN. They have embraced the concept, using it to claim they are part of tackling climate change, despite their net zero plans all including continued extraction of fossil fuels until 2050. According to leaked documents, more than 800 new oil and gas wells are going to be drilled around the world before the end of 2022. Industry claims it can offset its growing emissions using failed carbon markets, land-grabbing forest offsets (now called ‘nature based solutions’) and experimental technologies such as bioenergy carbon capture and storage and direct air capture (for more info see here). CEO and allies called out this hypocrisy in the first week of the talks, leading a ‘net zero toxic tour’ around the negotiating halls to explain what was really behind the agenda and the devastating impacts it would have on local communities, particularly those in the global South.

The net zero scam was also adopted by the fossil fuel industry’s financiers as a way to capture the agenda on defining what climate ‘solutions’ could look like - again enabled by the UK government and the UN. In his role as special COP26 advisor to both the UN and UK, the ex-Governor of the Bank of England Mark Carney set up the Glasgow Financial Alliance for Net Zero. He tasked it with ‘transforming’ the financial system to tackle climate change, but at its heart he placed the same financial institutions bankrolling fossil fuels, deforestation and other climate- and community-wrecking extractivist practices. The likes of BackRock, JP Morgan Chase and HSBC were handed a golden opportunity to greenwash their dirty images thanks to their weak net zero by 2050 commitments, but also to determine how the financial system should change and what it should fund. In reality this means a continuation of business as usual, with new opportunities for speculation and land grabbing through voluntary carbon markets and ‘nature based solutions’. At COP26 the private finance sector was lavished with praise by the UK government and the UN, leading Corporate Europe Observatory to call this COP the “biggest finance greenwash event in history”. This was particularly difficult to stomach given that leading up to it, COP26 was dubbed the ‘finance COP’, yet at the talks rich countries failed to provide the necessary finance for poorer countries, instead passing the buck to their profit-driven private finance institutions via the Glasgow Financial Alliance for Net Zero.

"Kick Them Out!" The Pacific Climate Warriors call for the fossil fuel lobby to be kicked out of the UN climate talks - it was a cry that we heard all around #COP26. More than any previous year. The momentum is definitely growing! @350 @StopCorpAbuse @350Europe @Ggow_COP pic.twitter.com/0hGcdNKE3b

Calls to kick big polluters out of COP26 need to be answered with a comprehensive conflict of interest policy. As a first step the UNFCCC and negotiating governments need to recognise that the profit driven interest of the fossil fuel industry is fundamentally and irreconcilably opposed to the public interest of keeping temperature rise below 1.5c and keeping fossil fuels in the ground. Then a firewall needs to be introduced to protect decision making from the fossil fuel industry, as happened to the tobacco industry before it, and not just at the UN level but also at national level. That’s why more than 130 groups wrote to the UK, EU and UNFCCC, calling on them to do just that, and this pressure won’t stop just because COP26 is over. Continuing this work at home, in our national capitals, will be key to making change happen, which is why the Fossil Free Politics campaign is planning to follow up the letter as well as building the political support in Brussels and all European capitals, toxifying the industry and tackling its grip over politics. This is how we unlock progress at the UNFCCC, and ensure those most responsible for causing climate change do their fair share.

The power that is building on the streets has not yet translated into action inside the negotiating halls, but it feels like more than ever that the walls protecting politicians and polluters from the wrath of the public are crumbling.

For a full overview of what CEO was doing at COP26, check out our video diaries here, as well as the dedicated COP26 page